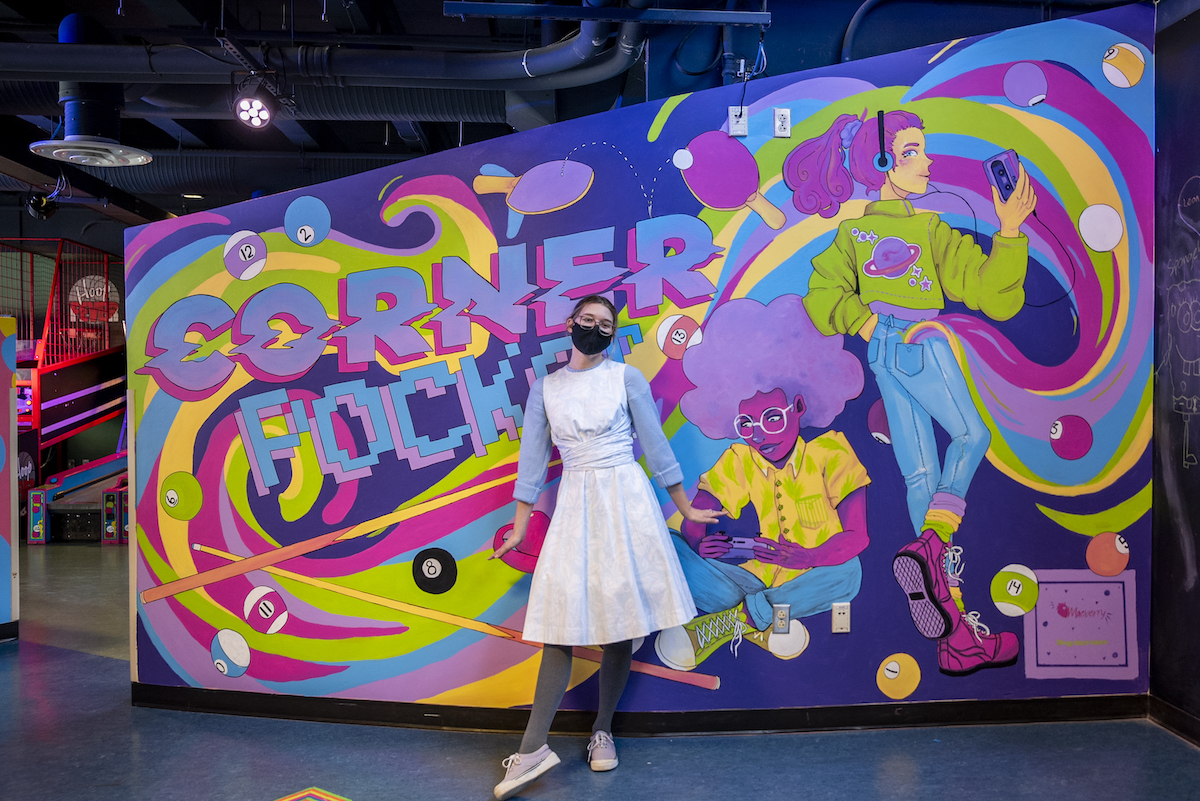 Amidst the arcade games, ping pong tables, and neon lights of the Corner Pocket, one of George Mason University’s student hang-out spots in the Hub, sits a brand-new addition: a mural by Lecsi Pillar, a senior art and visual technology student at Mason.

Because she had no prior experience designing and painting a mural, and because she submitted her pitch just a few hours before the application deadline, Pillar said she wasn’t expecting to be chosen for the project.

“I never would have thought I would be capable of doing something so large,” she said.

But when Jack Kenny, a team lead at the Corner Pocket, saw Pillar’s submission, he immediately knew her design was the one.

“It was just spectacular,” Kenny said.

This work is part of the larger Murals at Mason project.

“For student artists who have never done murals but want to learn, Murals at Mason provides mentorship throughout the project while still empowering the student to learn through the experience,” said Yassmin Salem, program manager for Murals at Mason and a Mason alum.

Murals at Mason and Corner Pocket leadership reviewed all the submissions and ultimately agreed to move forward with Pillar’s design because it was very colorful, included a variety of activities offered by the Corner Pocket, and cleverly referenced the name of the space, Salem said.

Pillar said she pulled inspiration for her design, which she themed “’80s disco,” from her parents.

“All the time, they tell me stories about their college experience in the ’80s and going to the roller disco,” Pillar said.

Pillar said she envisioned people hanging out and going to the arcade after school, just like she’s seen in movies about the ’80s.

But Pillar said it was also important for the mural to match the atmosphere of where it will be displayed. That way, it will feel as if it has always been there.

To play off the Corner Pocket’s name, Pillar said she had long envisioned a girl looking over her shoulder and the “energy,” or bright arcade vibes, of the space coming out of the corner of the girl’s back pocket.

To allow students to see themselves in the design, Pillar said she chose not to give the people in the mural skin tones and instead used background colors.

Pillar worked every day for two weeks in January, sometimes with the help of her friend, Mady Shaw, to ensure the mural would be done for the start of spring semester.

Because of her work on this project, Pillar got a job at Mason’s Student Centers as the lead graphic designer and has applied to multiple other off-campus mural projects.

Pillar said she credits Maria Karametou, an associate professor in Mason’s School of Art, for her motivation in doing this mural.

“I wouldn’t have taken this opportunity if she didn’t push me,” Pillar said. “The only reason I even conceptualized being able to do big things is because of her.”

See more of her art on Instagram at @maeberry_arts.