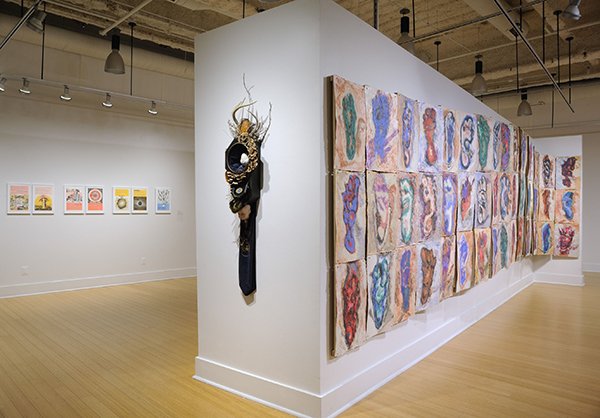 SUSPENDED INTER-SPACES is a group exhibition coordinated by Helen Frederick and Amelia Hankin in collaboration with the VisArts curatorial staff members Frank McCauley, Susan Main, and Megan Koeppel.  It illustrates the sometimes surprising and circuitous road from the initial conception of a work to its completion. Occupying all three VisArts galleries, the show presents eighteen different artists covering an array of perspectives about how artists work in relation to the products they make. Though these objects take on many curious forms, SUSPENDED INTER-SPACES concentrates on the mental aspects of creating works in relation to the context in which the artist is working. Amelia Hankin, who not only helped organize, but also participated in the show, says, “The concept was developed through observing the rituals that take place in the studio, rituals that transcend habit, from little routines, like a cup or two of coffee before working in the studio, to organizing the space before working.” (1)

Everyone included was asked to make works specifically for the exhibition but, as it developed, artists were free to switch their area of interest. Frederick, who also helped produce the show and contributed to it, says “The premise of the exhibition was our invitation for the featured artists to create new works that demonstrated a shift in their understanding and evolution of their visual thinking and interpretations during this time in particular.” (1) That only makes sense for an examination of how artworks emerge, but it took on new significance as the pandemic took hold and the social fabric started to fray.  Frederick’s own interactive work, titled Suspension/Space/Silence/Faltering, which encouraged the public to add their own messages of societal concern, is directly affected by current events, like the crisis in Ukraine.

Suspension/Space/Silence/Faltering can be seen in the Gibbs Street Gallery along with other works that call attention to social justice. Adjacent to Frederick’s display, Fleming Jeffries’ red wall hanging titled That Sunken Feeling / Desertification acknowledges the climate crisis by illustrating a catamaran boat. Around the corner from it, Tim Davis’ painting of a blue-faced person in a yellow room, titled Blue By You, uses a symbolic color system to address the “…’movements of black bodies’ and how it is marked by the physical, spatial, and bodily constraints of captivity, enslavement, lynching, fugitivity, racial segregation, redlining, no-go zones, mass incarceration, and gentrification.” (2) In proximity to Davis’s picture, Helen Zughaib’s installation, consisting of several two and three-dimensional works, expresses empathy for displaced migrants. Of these, Pair of Children’s Shoes reminds us of lost personal belongings or untimely deaths of people desperately fleeing their homelands for a better life. Concluding this section is Maria Barbosa’s installation, titled Just (before/after). Composed of paper leaves, textiles, text, sound, and video, this composition symbolizes the Hispanic asylum seekers’ journey as metaphorically linked to the cottonwood tree. The Gibbs Street Gallery works commingle to give a collective voice to some of the most vexing political controversies of our day. 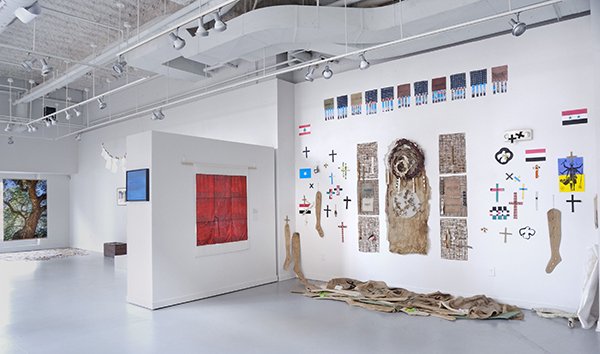 The lion’s share of the work is presented upstairs in the Kaplan and Common Ground Galleries. These are not segregated by sub-themes as in the lower level, but make various connections, aesthetically and conceptually, between works; for example, Nikki Brugnoli’s pencil drawing, titled Beloved, in the Kaplan Gallery, that combines portraits of herself and her son in order to consider the development of children in relation to past generations is staged side by side with Hankin’s display, titled As Water with Waters. Brugnoli’s picture is a response to the death of her father and, tragically, it has a lot in common with Amelia Hankin’s installation of screen-printed copies of birth announcements dedicated to the recent passing of her sister-in-law. Hankin reveals that her sculpture “…reflects on memory, loss, and grief, and the human need to find hope in hardship” (2)

The architecture of Hankin’s work echoes the altar-like design of Naoko Wowsugi’s installation of a video monitor surrounded by small spheres of dirt. Wowsugi’s composition, titled Seed Pods, instructs visitors to take and plant earth/seed mixtures that were imbued with “good energy” by the hands of the children that prepared them. This reference to ritual is a prominent sub-theme throughout the exhibition. Annie Ferrar’s and Chris Kajzar’s installations, both found in the adjacent Common Ground Gallery, convene interactive practices for symbolic purposes. Ferrar’s arrangement, titled Found Archetypes: Artist as Magician, incorporates Tarot cards and a table assembled with unorthodox relics in order to promote new understandings through the changed context that reading divination cards might provide, while Kajzar’s participatory event, titled Dear, invites viewers to send postcards with messages of “excess” in an exercise that could not only be thought of as protest, but also as a form of collective confession. 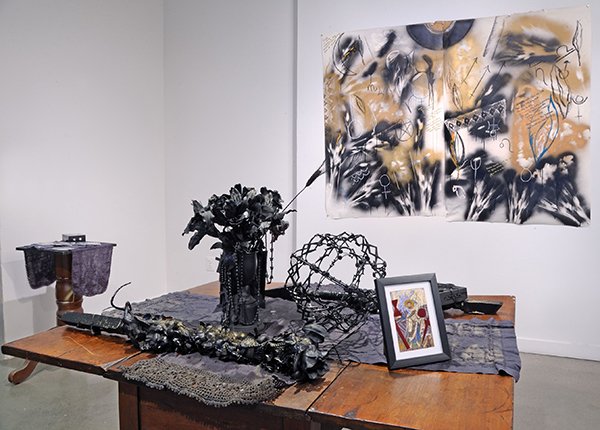 Back in the Kaplan Gallery again, Zofie King’s quirky constructions, such as Gatherer, resemble twisted curiosity cabinets that examine our instinct to collect. Dealing with the same subject in a different way, Yaroslav Koporulin’s painting of rock-headed figures, titled Stone Pickers, refers to collecting, but alternatively, as an existential need of doing something tangible in this world, even something as simple as accumulating stones.

The appropriation of found objects, as in King’s assemblages, is an especially prevalent strategy seen throughout the show. Travis Childers’ aggregation of ball point pen tops, titled Growth 2, makes heavy use of preexisting materials in order to transform these mundane items into life-like forms, while Bridget Lambert’s photography of a dollhouse interior, titled My Dreams Won’t Be Complete Without You, exploits ready-made elements, like toys, to produce puzzling dioramas for viewers to ponder. 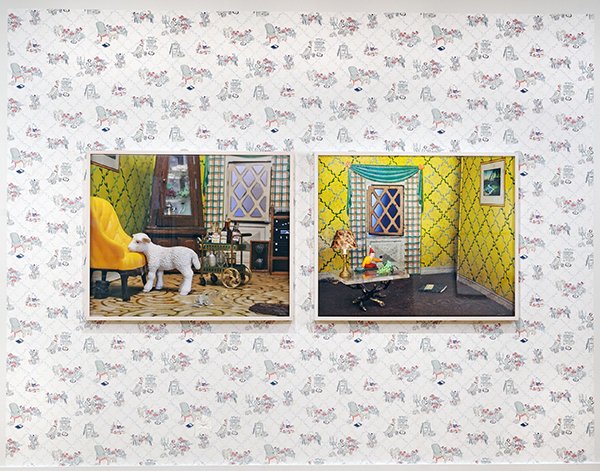 Bridget Lambert, Creature Comforts, The Pleasures of Life, and Dreams Won’t Be Complete Without You. Image courtesy of Gregory R. Staley Photography.

The use of repetition, as in Lambert’s prints, is another popular approach. Not only do we find this principle employed in Lambert’s wallpaper design, titled Creature Comforts, but also in the aforementioned Childers’ and Hankin’s works. In addition, Lynn Sures’ installation of footprints, titled Printed Through Time and Space, is laid out in an ordered grid. Her wall of embossed paper fossils designed to remind viewers of the extent of human evolution, might also recall meticulous museum organizations of such artifacts. Titled Asymmetric Symmetry, Tai Hwa Goh’s sculpture made of orange honeycomb balls, resembles the patterns of biological forms. Shanti Chandrasekar’s rhythmic hanging piece, titled Entropy – Macrostates and Microstates, made of hundreds of hand-punched paper circles, portrays randomness within physical systems. Chandrasekar’s delicate suspension of reiterating disks cascade from the ceiling to the floor following a fractal reduction where the smaller parts mirror the larger ones. 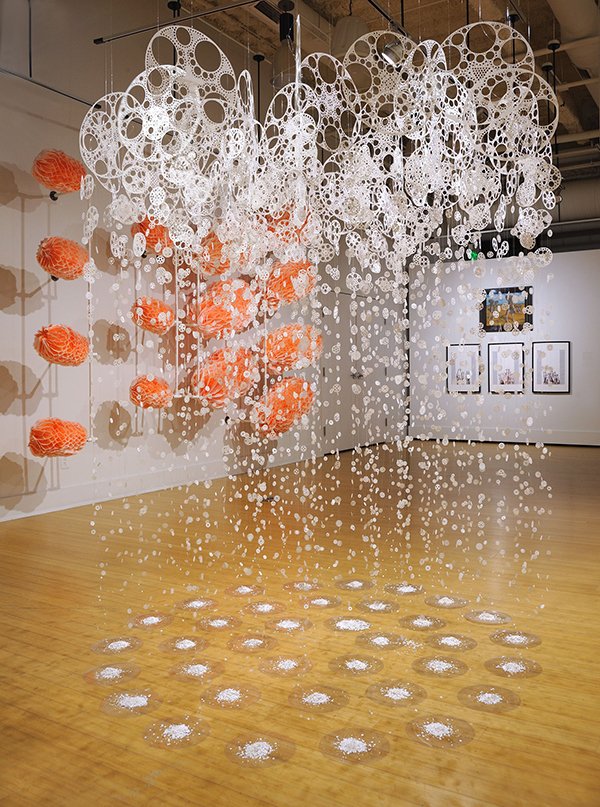 The contemplation of physics and heavenly bodies is yet another recurring theme. Along with Chandrasekar’s interest in the phenomenal properties of matter, Christopher Kardambikis’ series of prints, drawn in the style of pulp, graphic novels, combine the depiction of modern day planetary physics with the ancient Greco-Roman understanding of Cronos, the god of time. His edition of eight risographs, titled Chronomachy, (translated from the Greek meaning “Time Battle”), merges antique narrative with contemporary science in order to create a hybrid tale that describes the devouring nature of black holes implying, by analogy, the legitimacy of alternative explanations, such as myth, of the same astronomical phenomena.

SUSPENDED INTER-SPACES is an exhibition about the artistic process. Though originally developed to examine these practices generically, as artists found themselves isolated and enveloped in the sorrow and social unrest of the pandemic, they reacted to the context in which they were creating to reflect what they were perceiving the state of the world to be. Instead of business as usual, they inevitably gravitated to larger questions of existential importance, reporting their findings through repetition, myth, ritual, intuition, and metaphor.

SUSPENDED INTERS-SPACES can be seen at VisArts through May 15. Gallery Hours are Wednesday-Thursday from noon-4pm, Friday from noon-pm, Saturday-Sunday from noon-4pm. VisArts is located at 155 Gibbs St, Rockville, MD 20850. For more information see https://www.visartscenter.org/exhibitions-2-2/