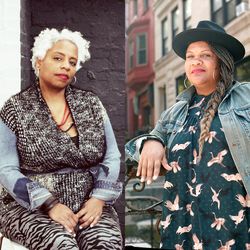 As our Spring 21 Visiting Filmmaker Series Online comes to a close, we are delighted to feature a lively conversation between filmmakers and friends Elissa Blount Moorhead (Back and Song) and Radha Blank (The 40-Year-Old Version).

Blank and Moorhead will discuss their work (and maybe play a parlor game or two) as we eavesdrop on their discussion and ask questions of our own. Elissa Blount Moorhead is an artist, curator, and producer — and a 2021 Sundance Fellow.

She has created public art, books, exhibitions, and cultural programs for the last 25 years. She is currently a principal partner at TNEG film studios, with Arthur Jafa and Malik Sayeed. TNEG asserts that a cinema calibrated to the cultural, socioeconomic, and existential particulars of Black being is not only possible way forward toward a viable Black cinema.

She is the author of P is for Pussy, an illustrated “children’s” book, and is featured in the new anthology, How We Fight White Supremacy: A Field Guide to Black Resistance. She is currently producing a documentary film on Gil Scott-Heron and a projection installation called As of A Now. 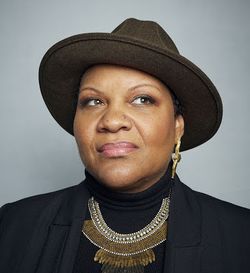 Radha Blank is a director, writer, performer and proud New York native. Winner of the 2020 Sundance Vanguard Award, Blank’s first feature film, The Forty-Year-Old Version, is one of the most acclaimed debuts of the year.

Radha is nominated for a DGA Award for Outstanding Directorial Achievement of a First-Time Feature Film Director, a BAFTA Award for Leading Actress, and an Independent Spirit Award for Best First Film.

In 2020, she was named as one of Variety’s “10 Directors to Watch” and called “A Brilliant Filmmaker” by The New York Times.

A Helen Merrill Award recipient, Radha’s acclaimed play Seed was deemed “fresh, lively…and poetic” by HuffPost. She’s written for Empire (Fox) and She’s Gotta Have It(Netflix). When not writing for the stage and screen, Radha performs as RadhaMUSprime, whose brand of hip-hop comedy has sold out shows from New York to Norway.

This event is free and open to the public.

Read “A Writer-Director-Star Breaks Through. It Only Took a Lifetime,” Alexis Soloski, New York Times, Oct 6, 2020

Give
Film at Mason students are creating work under challenging circumstances and many face increased financial hardship due to COVID-19. A gift of any size in support of scholarships will help our students complete their education. Make a gift.